Introduction to the American Cultures Requirement (2022)

Fought for throughout the latter half of the 1980s, agreed upon by campus faculty in 1989, and the first courses launched in 1991, Ling-chi Wang, emeritus professor of Asian American Studies, called the American Cultures (AC) Requirement “one of the most important curriculum-reform projects in the history of this campus. American Cultures challenges each discipline to raise questions that they had never raised before, and in the process, they have uncovered unknown aspects of their own disciplines.” The Requirement was instituted in 1991 to introduce students to the diverse cultures of the United States through a comparative framework.

The American Cultures Requirement constitutes a new approach that responds directly to the problem, encountered in numerous disciplines, of how better to present the diversity of American experience to the diversity of students we now educate.

These courses focus on how the diversity of America's constituent cultural traditions have shaped and continue to shape American identity and experience. 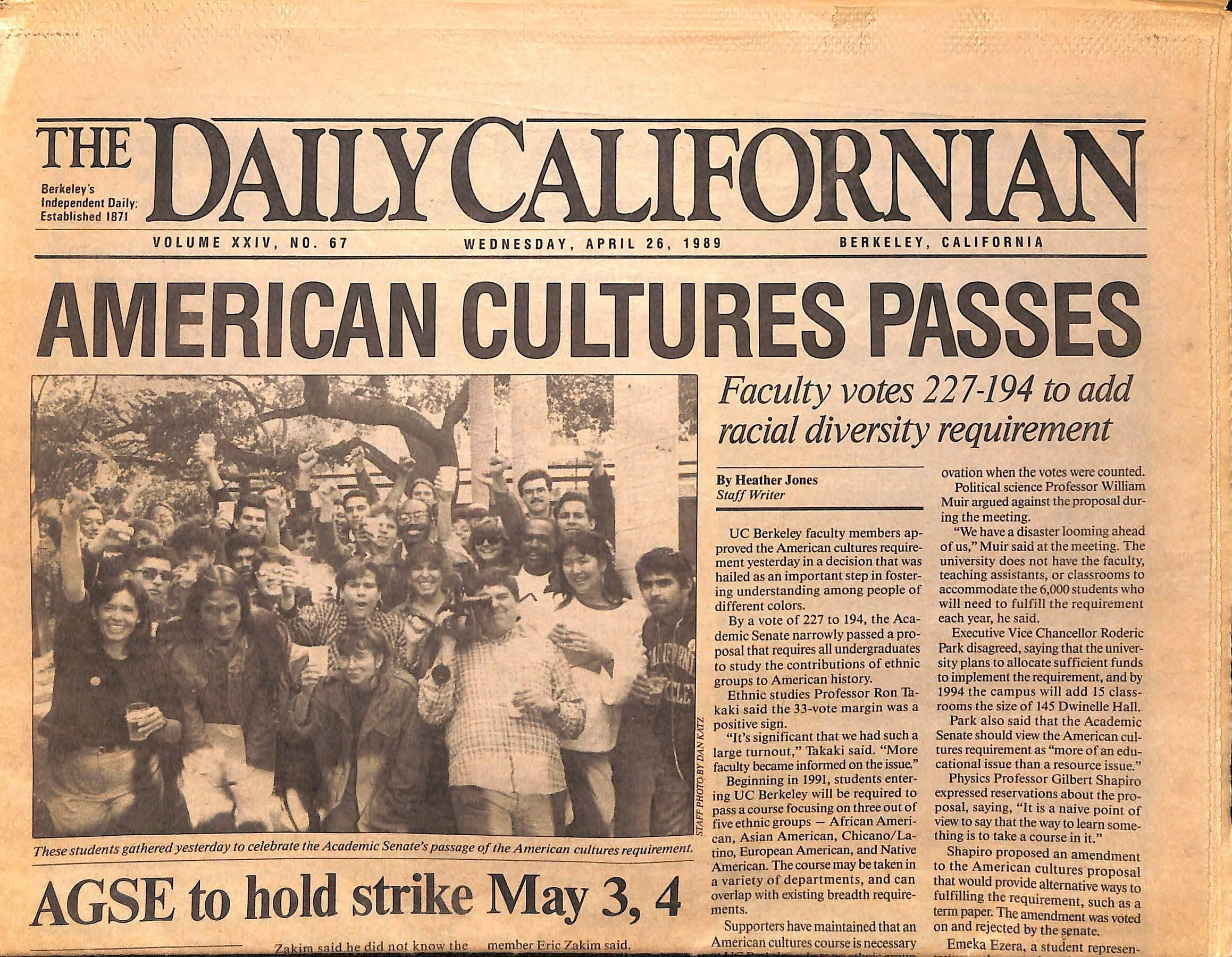 Political Uprisings & Demographic Transformations: In the 1960s, institutions of higher education see a rapid increase in students of color at what were traditionally white colleges and universities in the U.S. Before 1965, the majority of Black students in the country were enrolled at Traditionally Black College and Universities. The increase in enrollment is primarily due to several landmark legislations, including the 1965 Higher Education Act (HEA) and the 1965 Immigration Nationality Act (INA). The HEA greatly expands financial aid to college students, allowing more students of color to attend more colleges and universities... Read More

The "Opening of the American Mind" - Curricular Insurgencies: “As the more diverse student body demanded a more diverse education, the nearly all-white faculties at US universities fiercely guarded the notion that a proper education emerged from studying the whitewashed canon of Great Books and viewed anything that might question the objectivity of that premise as an unwarranted political intrusion. The faculty attitude around the country was, ‘We let you in here. Come in, sit down, and enjoy the show.'” Professor Troy Duster, Changing the Culture of the Academy, 2007 As the number of enrolled undergraduate students of color increased at UC Berkeley, so did a demand for ... Read More

Partnered Struggles - Global Uprisings against South African Apartheid and Desegregating the UC Berkeley curriculum: In 1976, halfway across the world in Soweto, South Africa, Black school children bring years of unrest and civil disobedience to the apartheid state, and the vibrations are felt in California and in the ports of San Francisco and Oakland, an anti-apartheid boycott, inspired by the Soweto schoolchildren grows. In 1986, UC Berkeley students join the SF and Oakland longshore and Warehouse workers to organize against South African goods being disembarked and divestment of the UC Regent pension investments from South African apartheid businesses... Read More

Building the AC Requirement: Passed by the UC Berkeley Senate in 1989, the AC requirement was the first and only campus-wide graduation requirement for all UC Berkeley undergraduate students. When the requirement was first created, there was not one course on campus that could meet the comparative parameters of the requirement.  A massive feat, the curriculum had to be built within two years to ensure that incoming students in 1991 had the necessary courses to prepare for graduation, catalyzing the most dramatic ideological effort in the university’s history... Read More

The War on Diversity, and the Growth of Colorblindness: As multiculturalism becomes the byword for the state of California and the UC system becomes ‘minority-majority’, just a few years into the creation of the AC curriculum, the state of California is the bellwether of ‘the culture wars’. By the mid-1990s, the political ideology of colorblindness, explaining racial matters as the outcomes of nonracial dynamics shapes the national discourse, and the political slingshot against demographic diversity and race-centered public policies curdled by Prop 187, Prop  209 and ... Read More

On Beyond 30: Everything is the same and nothing is the same. Entering its third decade, the AC curriculum is the site of new energy and rebuilding, responding to the global conversation on state-violence and anti-Black racism. Creating pedagogical spaces for faculty to exchange ideas in this most intellectually demanding, often emotionally exhausting and politically busy space, AC programs have been created at the apex of research, teaching, learning, and racial justice. Recently, Teaching in Troubled Times, Data Justice, and the Creative Discovery Fellows (CDF) programs, have been formed to create new framings and build new ideas to meet the historical juncture of the complex political times... Read More