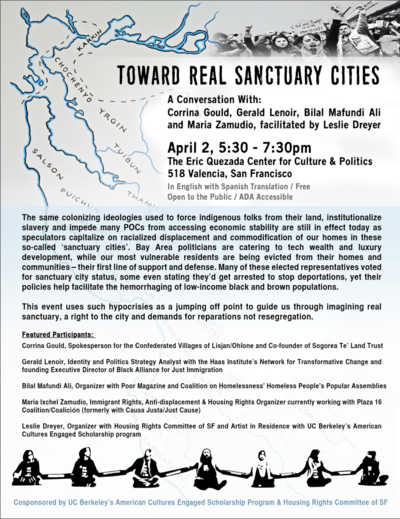 Details:
The same colonizing ideologies used to force indigenous folks from their land, institutionalize slavery and impede many POCs from accessing economic stability are still in effect today as speculators capitalize on racialized displacement and commodification of our homes in these so-called ‘sanctuary cities’. Bay Area politicians are catering to tech wealth and luxury development, while our most vulnerable residents are being evicted from their homes and communities – their first line of support and defense. Many of these elected representatives voted for sanctuary city status, some even stating they’d get arrested to stop deportations, yet their policies help facilitate the hemorrhaging of low-income black and brown populations.

This event uses such hypocrisies as a jumping off point to guide us through imagining real sanctuary, a right to the city and demands for reparations not resegregation.