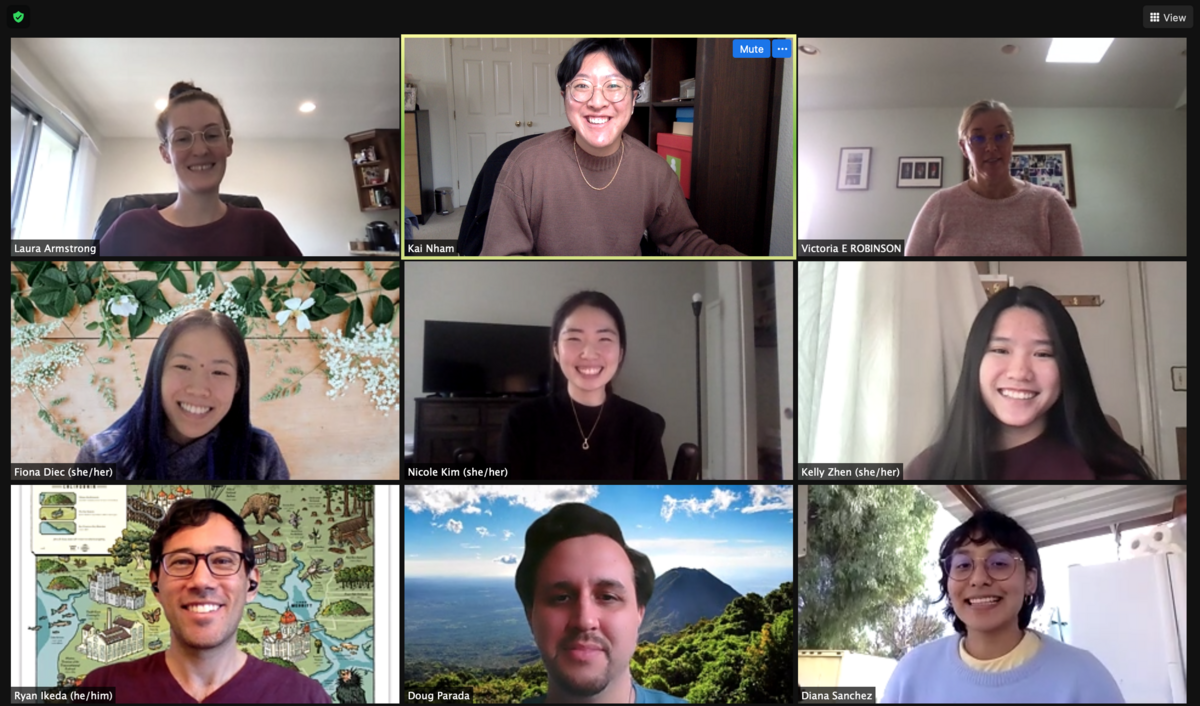 Laura (she/her) is an education researcher focused on mixed methods research and program evaluation. She has a B.S. (Southern Oregon University) and Master’s (UC Berkeley) in chemistry and is currently a PhD candidate in science and math education at UC Berkeley. She has been working with the Creative Discovery Fellows since 2018 and has collaboratively developed a program model and evaluated targeted student, instructor, and program outcomes. Her research interests include exploring how best to make research and evaluation data accessible and useful to as many people as possible. In her free time, she enjoys watching her dog sleep, collecting running shoes, and being overly critical of TV shows.

Fiona (she/her) is currently a fourth-year undergrad majoring in Psychology with a minor is Asian American and Asian Diaspora Studies. Her passions lie in finding the intersection between design and social justice. Fiona is currently one of the Creative Discovery Fellows’ Program Coordinators and has been working on the team since 2019.

Ryan (he/him) is the Pedagogy Coordinator for the Creative Discovery Fellows Program. He is a PhD Candidate at UC Berkeley's Rhetoric & New Media Departments.

Kai (he/him) is a current Master of Information and Data Science candidate at UC Berkeley. With a B.A. in Asian American and Asian Diaspora Studies (UC Berkeley), he holds love for his communities and a vision of liberation for all at the center of his work. Kai currently is Creative Discovery Fellows’ Program Manager and has been working on the team since 2019.

Doug (he/him) is the Program Associate for the American Cultures Center. He has supported the Creative Discovery Fellows Program since its inception in 2018. He graduated from UC Berkeley with a Bachelors Degree in Spanish and Classics and recently finished his JD degree in Fall 2020. While he does not look forward to endless nights preparing for the California Bar Exam, he enthusiastically awaits being able to directly support the immigrant community as an immigration attorney.  In his spare time, he loves to collect vintage hip-hop, soul and Latinx records and learn about neuroscience.

Victoria (she/her) is the Director of The American Cultures Center, and a faculty member at UC Berkeley's Department of Ethnic Studies, teaching courses addressing race and ethnicity in the United States and global female migrations. Her most recent area of research addresses the gendering of post-industrial return migrations to the Caribbean.  Dr. Robinson is a graduate of Oxford University (Post-doctoral studies in Comparative Migration Systems), the University of London (Ph.D. Political and Cultural Geography) and the University of Wales at Aberystwyth (B.A. in Geography and International Relations). Her initial graduate studies addressed the migrations of women from Somalia and The Philippines to Southern Europe, while working in Rome at ‘La Mensa d’ Trastevere’, a non-profit organization facilitating the incorporation of undocumented immigrants.

Diana (they/them) is a third-year undergrad majoring in Psychology. They joined the team Fall 2020 & works as a  Student  Consultant with the Creative Discover Fellows’ Design Team. Diana is a Pisces and likes to draw. Their dream is to become a tattoo artist, but for now, they'll be sticking to drawing on paper.

Kelly (she/her) is a first-year undergraduate student at UC Berkeley intending on majoring in Economics and Psychology. She joined the team in 2020 and is currently on the Creative Discovery Fellows’ Design Team as a Student Consultant. She is passionate about teaching others and spreading knowledge, especially about social justice and graphic design. In her free time, she enjoys baking, playing the ukulele, or rewatching the same five Netflix shows.