During the Fall of 2016, students with the UC Berkeley ACES program worked with artist and anti-displacement organizer, Leslie Dreyer, in conjunction with the San Francisco Anti-Displacement Coalition (SFADC) and the Coalition on Homelessness. Throughout the residency, they learned the policies and politics driving Bay Area displacement, how to use art, social media, and community organizing to resist displacement and were connected to homeless and housing advocacy groups on the frontlines of the housing justice struggle.

For their final project, they helped build, stage, and document a pre-election anti-displacement action designed by Dreyer with SFADC and COH and built this website to educate students about the negative impacts of gentrification and eviction. Though this site is more an information hub than a student group, there is hope that this collaboration may catalyze a longer, deeper relationship between UC Students and the broader Bay Area housing movement. 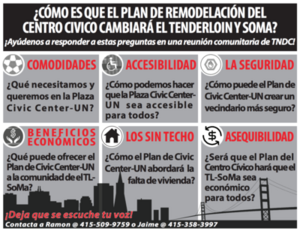 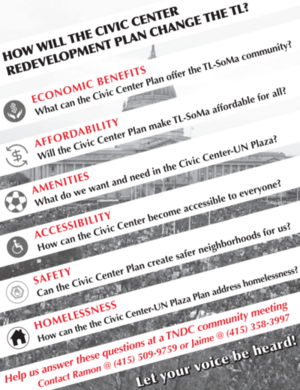 A meeting with the City of San Francisco urban planners provided further insights into not only city planning processes but also the thorny politics of public/private partnerships.  Community members then identified several core concerns about the redevelopment plan, which the students incorporated into posters.  Guided by Architecture Ph.D. candidate and Chancellor’s Public Fellow Alec Stewart, the students used design exercises, Adobe software, and Slack to render several posters in English, Mandarin, and Spanish.  These posters will prove instrumental in developing a coalition of residents, activists, and nonprofit organizations dedicated to protecting and enhancing the Tenderloin community over the next two years.  The project also deepened ACES students’ understanding of several key course topics, including social justice, public space, and the cruelly widening wealth gap in San Francisco.  Through their experience of community organizing and activism, ACES students learned firsthand that gentrification is neither inevitable nor inexorable. 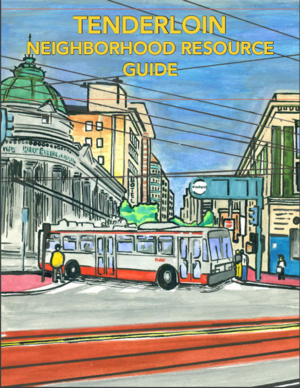